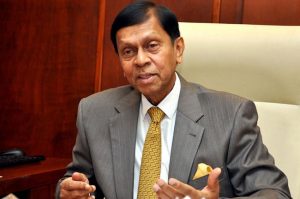 The Governor of the Central Bank of Sri Lanka (CBSL) Ajith Nivard Cabraal has denied reports that he has been summoned by the Cabinet of Ministers for its meeting today.

In a twitter message, the governor said the news reports claiming that he has been summoned by the Cabinet to discuss matters related to seeking the assistance of the International Monetary Fund (IMF) were originated by an ‘opposition politician’ and that they are ‘totally fake’.

He alleged that this is a part of the opposition’s misinformation campaign to cause uncertainty.

“The media stories originated by an Opposition politician that the Cabinet has summoned the Governor of the CBSL to discuss seeking IMF assistance is totally fake. This is a part of their misinformation campaign to cause uncertainty,” he tweeted.

It was reported yesterday that the Secretary to the Finance Ministry Mr. S.R. Attygalle and the CBSL Governor Mr Ajith Nivard Cabraal have been summoned to the Cabinet meeting today (13).

The Cabinet is set to meet today for the first time since the government’s Budget for the financial year 2022 was passed in parliament.

The meeting is reportedly expected to also focus on the foreign exchange reserves crisis the country as well as the controversial Yugadanavi power plant deal.

Meanwhile state minister Dayasiri Jayasekara says he believes the country should seek the assistance of the International Monetary Fund (IMF) at this moment.

Speaking to reporters following an event, he said: “I think at this point we need to negotiate and work with the IMF as an alternative.”

He said it currently appears that other countries seem a little less supportive to Sri Lanka and that therefore he personally believes that the country should discuss with the IMF and move forward.

He said the Sri Lanka Freedom Party (SLFP) has still not discussed the matter and that they have many ideas which they intend to present correctly in the future. – ada derana