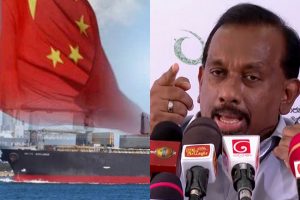 The Sri Lankan government today said it has decided to pay USD 6.7 million to the Chinese fertilizer company that had shipped the disputed fertilizer consignment, on the advice of the Attorney General’s Department.

According to Agriculture Minister Mahindananda Aluthgamage, the payment includes the cash deposit of USD 5 million placed by the company.

The minister added that the company, China-based Qingdao Seawin Biotech Group, has been requested to re-manufacture the fertilizer to comply with the required standards.

The fertilizer shipment in question was under the spotlight over the past few months after the National Plant Quarantine Services (NPQS), which tested the fertilizer samples sent by the Qingdao Seawin Biotech, revealed the detection of the microorganism called ‘Erwinia’ in September.

However, the Agriculture Minister had later insisted that the ship carrying the fertilizer consignment containing harmful bacteria will not be allowed to enter Sri Lanka.

He had also said that the samples from this fertilizer shipment will not be re-tested, nor will any payment be made to the Chinese firm in question.

Meanwhile the the Ceylon Fertilizer Company (CFC) had secured two enjoining orders from the Colombo Commercial High Court against Seawin Biotech, its local agent and the state-run People’s Bank, preventing the payment to the Chinese firm on Letter of Credit.

The first court order against the Chinese firm in question was secured on October 23, blocking the People’s Bank from making any payment under a Letter of Credit opened in favour of the Chinese company.

The Colombo Commercial High Court had recently extended the interim order until December 23.

On October 29, the Economic and Commercial Office of the Chinese Embassy in Colombo blacklisted the People’s Bank, citing its failure to make the payment in compliance with the Letter of Credit and the contracts.

In a statement, the Chinese Embassy stressed the People’s Bank of Sri Lanka has recently witnessed vicious event of Letter of Credit default, causing huge losses to the Chinese enterprises in international trade with Sri Lanka.

However, the People’s Bank, in response to the Chinese Embassy’s move, said the payment for the organic fertilizer consignment shipped by Qingdao Seawin Biotech Group Co. Ltd. was halted due to an interim injunction issued by the court.

In the meantime, the Qingdao Seawin Biotech sent a letter of demand on November 08, seeking USD 8 million in damages from the Additional Director of the National Plant Quarantine Services (NPQS) of Sri Lanka.

The Chinese firm had sent the letter of demand to Dr. W.A.R.T. Wickramaarachchi, Additional Director of the National Plant Quarantine Service of the Department of Agriculture. – ada derana