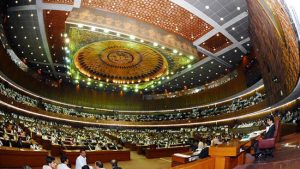 The government of Pakistan has decided to summon the Senate and National Assembly sessions to discuss the brutal lynching of Sri Lanka national Priyantha Kumara that occurred in Sialkot earlier this month.

The incumbent regime also plans to formulate legislation to bring an end to “horse trading” in the Senate.

Pakistani Prime Minister’s Adviser on Parliamentary Affairs Babar Awan noted that on the advice of the premier, a debate will be held on the killing of Priyantha Kumara in both houses of parliament.

The Senate session has been called on December 20 and the National Assembly sitting on December 22. Babar also held consultations with Senate Chairman Sadiq Sanjrani on the matter.

The 48-year-old, Priyantha, who was employed as an exports manager at a factory, was brutally murdered by a mob earlier this month, accusing him of committing blasphemy. Later, his body was set on fire.

Priyantha’s mortal remains were repatriated to Colombo with state honours. Sri Lanka High Commissioner Mohan Wijewickrama maintained that the Sialkot incident would not affect the relations between Pakistan and Sri Lanka.

Afterwards, a remembrance ceremony was held at the Prime Minister’s Office for the slain Sri Lankan where a certificate of appreciation was awarded to Malik Adnan, a colleague who tried to rescue Kumara from the mob, in recognition of his bravery to safeguard the victim while risking his own life.

Babar also noted that an approval for legislation will be sought from the cabinet to curb the practice of “buying and selling votes” in the Senate. -Agencies