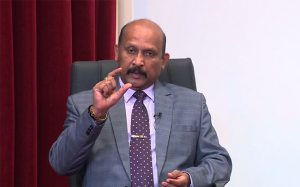 Secretary of Defence, General (Retd) Kamal Gunaratne, says that Sri Lanka’s Armed Forces have played a vital role in ensuring national security as well as nation building process over the past two years.

The Defence Secretary expressed these views while speaking at a media briefing organised by the Presidential Media Centre this morning (15) on the activities of the three armed forces during the past two years.

Defence Secretary Gunaratne said the country’s national security has been ensured and there is no room for separatism, and also added that no Sri Lankan should have any undue fear. He also said that the state intelligence service and other intelligence services are being operated as a strong single network today.

The freedom that war heroes made available in the country by sacrificing their lives and the national security of the country was turned upside down following the Easter Sunday attack, he said. The Secretary of Defence alleged that the investigations were not carried out properly during the previous government’s tenure and said all necessary assistance will be provided to the judiciary in order to bring justice to the innocent families affected by the Easter Sunday attack.

Responding to a question on whether the country was being militarized, Defence Secretary Gunaratne said a few retired army officers holding government posts was not a sign of militarisation and asked whether it would be wrong for a retired military officer to use his years of knowledge and experience to serve the country and the people.

He said it is the responsibility of the Armed Forces to ensure the national security of the country as well as to take the necessary steps to build the nation. The Defence Secretary pointed out that the Army, Navy and Air Force are playing a major role in this regard.

At the same time, the Sri Lanka Army has made a significant contribution to the Covid-19 control programme. Brigadier Premaratne said that the Army is making an immense contribution in maintaining treatment centres, quarantine centres as well as intermediate treatment centres under the guidance of the Army Commander. The Army was also instrumental in developing the infrastructure facilities to meet the needs of the people.

Captain Indika De Silva, Media Director, Navy Headquarters, said that the Sri Lanka Navy also has a great role to play as the Navy of an island nation.

Captain De Silva said the Sri Lanka Navy has seized more than Rs. 35 billion worth of illicit drugs in the last two years alone and as the nation’s foremost defence line, it had done a great service to the country and the future of the youth.

At the same time, the Civil Engineering Division of the Sri Lanka Navy has been providing an extensive contribution to the construction sector. The Navy is also committed to uphold the welfare of the people and has implemented several projects to provide clean drinking water facilities to the people. Captain Indika De Silva said that the Sri Lanka Navy is working to ensure the safety of the Coastal Ecological Zone as well as to conserve mangroves.

He said that the Sri Lanka Navy is also actively involved in controlling the Covid-19 virus spread and the management of the vaccination drive of the country.

Sri Lanka Air Force Media Director Group Captain Dushan Wijesinghe also expressed his views. With the spread of Covid-19, the Sri Lanka Air Force was committed to cleaning and disinfecting operations as well as contributed to launch environmental conservation projects including aerial seeding for protected areas in order to increase the forest cover of Sri Lanka as mentioned in ‘Vistas of Prosperity and Splendour’ policy statement.

He further said that the Sri Lanka Air Force is also actively contributing to a joint project with the Sri Lanka Police to reduce urban traffic congestion.