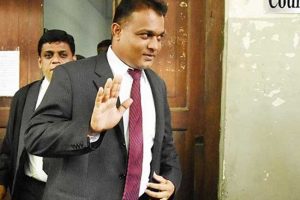 The Colombo High Court today ordered to acquit and release interdicted Magistrate Thilina Gamage from the case filed over the illegal possession of an elephant calf.

Delivering the decision today, Colombo High Court Judge Damith Thotawatte stated that the prosecution has failed to prove the allegations against the defendant Thilina Gamage beyond a reasonable doubt.

Therefore the court ordered to acquit and release him from the case, Ada Derana reporter said.

However, the court decided not to acquit the other defendants named in the case including the former Assistant Director of the Wildlife Conservation Department Upali Pathmasiri, the clerk in charge of the Elephant Registration at the department Priyanka Sanjeewani and Chandraratne Yatawara, who is said to be the first owner of the elephant calf.

The High Court Judge ordered them to present their defence when the case is taken up before the court once again on January 21, 2022.

In July 2019, the Attorney General had filed the indictments against the interdicted magistrate and the three other defendants on 25 counts, accusing them of committing a crime under the Public Properties Act by keeping the elephant calf named ‘Sakura’ using a forged license. – ada derana