The inaugural Lieutenant General Denzil Kobbekaduwa Memorial Oration organized by the Institute of National Security Studies (INSS) was held at the Suhurupaya auditorium in Battaramulla on Thursday (Dec 16). 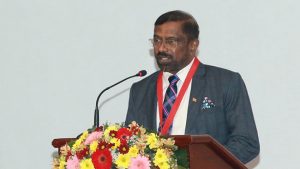 Former Commander of the Sri Lanka Navy, Foreign Secretary Admiral Colombage commenced his speech recalling his personal experience with the late General during the LTTE war. He observed that Lieutenant General Kobbekaduwa was one of the best military officers of the modern times of Sri Lanka who was an exceptional officer and a true gentleman.

Delivering the oration, he said that Sri Lanka from ancient times had attracted the attention of world powers due to its strategic geological location which is a most valuable asset to the country.

Elaborating what the country was faced with fighting a separatist terrorist group, he said that the LTTE was able to carry out their attacks from all three spheres of land, sea and air unlike any other terrorist group in the world. They pioneered the suicide attack and are also responsible to the killing of two world leaders. And to date they have a most extensive and in-depth terrorist financing and money laundering network, he said.

“It was an essentially an internal armed conflict but we do see a lot of elements from other countries in the battle as well”, he observed. Beating all odds Sri Lanka was able to defeat the LTTE, he said.

“Diplomacy is the main tool with which the foreign policy of a government is translated into actions in the international system and a diplomat is an important cog in the wheel and that is why the President is carefully selecting diplomats to serve the country as they represent the voice of Sri Lanka in the international fora,” he was quoted as saying.

“At present the country is mainly focusing on economic diplomacy.” We have to make use of the advantage of the location of our country in the international domain to our benefit, he further said. He also revealed that a written down policy directive has been formulated for the first time.

He concluded reiterating on the importance of unity and peace among the people for a better future.

The INSS is the premier think tank on national security of Sri Lanka under the State Ministry of National Security and Disaster Management.

The Institute organizes events of national and international importance and conducts a broad array of research and analysis on national security for the Ministry of Defence.

The ceremony began with the lighting of the traditional oil lamp by the dignitaries followed by Mrs. Lalini Kobbekaduwa, wife of the late senior military officer paying floral tribute to the picture of her late husband.

A moment of silence was observed in memory of all the fallen heroes during the ceremony.

Secretary to the Ministry of Public Security Major General Jagath Alwis, Commander of the Navy Vice Admiral Nishantha Ulugetenne, Army Chief of Staff, Military Liaison Officer at the MOD, senior officers of tri forces and police, members of the diplomatic corps, members of the INSS and family members of late Lieutenanat General Kobbekaduwa were also present at the ceremony. – ada derana