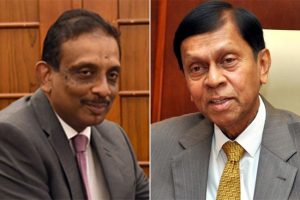 Governor of Central Bank of Sri Lanka, Ajith Nivard Cabraal and Secretary to the Finance Ministry, S. R. Attygalle will be summoned to the next meeting of the Cabinet of Ministers, sources told Ada Derana.

Reportedly, President Gotabaya Rajapaksa has given directives at the Cabinet meeting held today (Dec. 20) to inform the CBSL governor and the Finance Secretary to attend the next meeting.

It was also reported last week that the duo would be summoned to the Cabinet meeting held on Dec. 13. It was the first Cabinet meeting since the government’s budget for the financial year 2022 was passed in parliament.

However, Cabraal later denied reports on being summoned by the Cabinet of Ministers for its meeting. He tweeted, “The media stories originated by an Opposition politician that the Cabinet has summoned the Governor of the CBSL to discuss seeking IMF assistance is totally fake. This is a part of their misinformation campaign to cause uncertainty.” – ada derana