The three-wheeler drivers’ union has decided to increase the fare for the first kilometre following the price hike announced by the Ceylon Petroleum Corporation (CPC) and Lanka IOC. 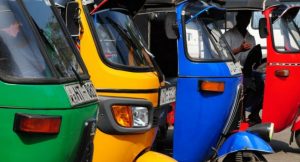 The chairman of the union, Lalith Dharmasena said the new minimum fare will be increased to Rs. 80.00, and up to Rs. 45.00 from the second kilometre.

Meanwhile, Lanka IOC has also decided to increase the fuel prices with effect from today (December 21) in line with the CPC’s move.

Thereby, the price of 92 Octane Petrol has gone up by Rs. 20 per litre and the new price now stands at Rs. 177 per litre. The price of Petrol Extra Premium 95 was meanwhile increased to Rs. 210.