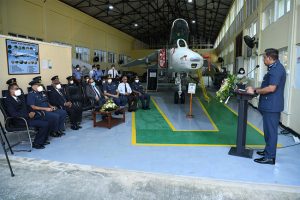 Sri Lanka Air Force (SLAF) has handed over a MiG-27 aircraft to the University of Moratuwa, with the view to strengthen the longstanding partnership between the institutions.

The aircraft was officially presented to the Vice-Chancellor of Moratuwa University, Senior Professor Niranjan Gunawardana by the Commander of the Air Force, Air Marshal Sudarshana Pathirana, during a ceremony on Monday (Dec 20).

The SLAF has provided much assistance towards the establishment of the Aeronautical Engineering Degree program at the University and the donated SLAF aircraft that had served national requirements in the past would continue to be of use as a valuable educational aid for aspiring aeronautical engineers of the country, it said.

The air force and university officials have also agreed to continue their mutual cooperation especially in the spheres of research and development such as the development of the “Lihiniya” indigenous UAV system.

Senior SLAF and University officials were also present at this ceremony. – ada derana