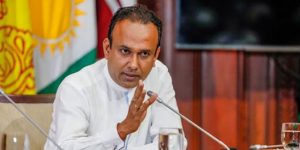 “We hope to send $5 million worth of tea each month to repay Iran for oil purchases pending since the last four years,” he said.

Sri Lanka has to meet about $4.5 billion in debt repayments next year starting with a $500 million international sovereign bond in January, but the country’s foreign reserves dwindled to $1.6bln at the end of November, the latest data from the central bank showed.

This month, Central Bank Governor Ajith Nivard Cabraal said Sri Lanka is confident of being able to “seamlessly” repay all sovereign debt that comes due in 2022.

But Fitch Ratings this month downgraded Sri Lanka’s sovereign rating to ‘CC’ from ‘CCC’, citing a growing risk of debt default in 2022, despite repeated assurances from the central bank.

Sri Lanka has foreign currency debt service payments of $6.9 billion in 2022, equivalent to nearly 430% of official gross international reserves as of November 2021, Fitch said in a press statement.

A senior member of the country’s tea board said it was the first time they had been able to use tea supplies for a barter arrangement to settle foreign debt.

Sri Lanka produces about 340 million kilogrammes of tea annually. Last year it exported 265.5 million kg of tea, making it the largest forex earning crop, with earnings of $1.24 billion in 2020.