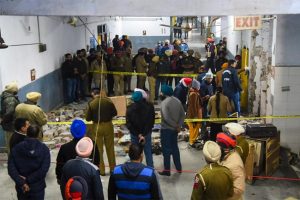 A powerful explosion at a court building in Ludhiana, a city in India’s northern Punjab state, killed at least two people and wounded two others, according to police.

Thursday’s blast damaged the walls of a restroom at the judicial complex and shattered glass in other rooms, broadcaster NDTV reported.

Footage posted online showed police officers carrying the injured out of the building. Officers were also seen asking others to leave the premises and clear the area.

The cause of the explosion was not immediately clear.

In a Twitter post, Channi also expressed his sadness over the explosion and said he was heading to the site.

“I assure the people of the state that the guilty would not be spared,” he wrote.

“Anybody trying to disturb the peace and harmony of the state, will be taken to task.”

Four suspects in killing of Haitian president sent to US

A timeline of papal visits to Africa: From Paul VI to Francis