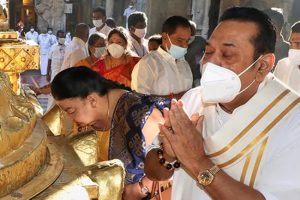 Sri Lankan Prime Minister Mahinda Rajapaksa, who is on a two-day spiritual visit to India, on Friday offered prayers at the famous hill shrine of Lord Venkateswara in Tirumala in India’s Andhra Pradesh along with his wife Shiranthi Rajapaksa.

PM Rajapaksa came to India on Thursday to pay his visit to the temple city of Tirupati.

He was accorded a warm welcome by the joint executive officer of Tirumala Tirupati Devasthanams (TTD) Veerabrahmam and chief vigilance and security officer Gopinath Jatti as he arrived at the temple gate.

After darshan, the priests performed a ritual associated with seeking blessings of Lord Shiva at the Ranganayakula Mandapam.

While taking a tour of the temple, PM Rajapaksa also deposited money into the ‘Hundi’ and the couple was presented with a memento, New Year calendar and diaries by authorities.

PM Rajapaksa visited the temple in February 2020 when a special ‘pooja’ was performed at the Devasthanam on the first anniversary of his current term.