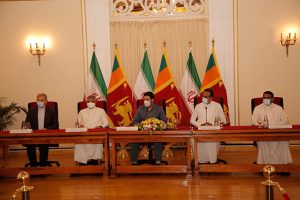 Minister Plantation Sri Lanka Dr. Ramesh Pathirana, and Deputy Minister of Industry, Mine, Trade of the Islamic Republic of Iran Alireza Paymanpak signed the MoU on behalf of their respective Governments at the Foreign Ministry on 21 December.

This was with the main focus to promote the mutually beneficial cooperation between Sri Lanka and Iran in the field of economic relations, the foreign ministry said.

“The MoU aims at increasing the sale of Ceylon Tea to the Islamic Republic of Iran through the settlement of an outstanding payment for the oil purchases by the Government of Sri Lanka.”

The Deputy Minister of Industry, Mine, Trade of the Islamic Republic of Iran Alireza Paymanpak also paid a courtesy call State Minister of Regional Cooperation Tharaka Balasuriya and Secretary of the Foreign Ministry Admiral Prof. Jayanath Colombage, and discussed the matters of mutual interest and ways of further enhancing the bilateral relations between the two countries, the statement said. – ada derana