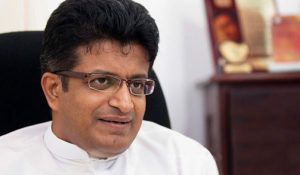 Sri Lanka will ink the long-dragging deal with India to jointly develop the Trincomalee oil tank farms in a month’s time, The Hindu reported.

“We have been negotiating this for 16 months, and we are now very close to finalising the terms of the Trincomalee project with India. We hope to sign the agreement in a month,” Energy Minister Udaya Gammanpila told The Hindu.

The Minister said he has instructed the Ceylon Petroleum Corporation (CPC) to form a subsidiary company, Trinco Petroleum Terminal Ltd., for the purpose. The move follows President Gotabaya Rajapaksa’s nod to setting up the special purpose vehicle ahead of the next Cabinet meeting.

“We don’t have a Cabinet meeting this week because of the holidays. We will get the decision ratified in the next one,” Mr. Gammanpila said.

During the Second World War, the British built the Trincomalee oil tank farms to serve as a refuelling station, adjacent to the Trincomalee port, an enviable natural harbour. The nearly century-old oil tanks need to be refurbished — at the cost of millions of dollars — if they are to be fit for use again.

If the deal is finalised and signed next month, it will not only mark the culmination of India’s 16-month-long negotiation with the ruling Rajapaksa administration but will also give shape to a proposal envisaged 35 years ago, in the Indo-Lanka Accord. Despite the Accord — in its annexure — stating that “the work of restoring and operating the Trincomalee oil tank farm will be undertaken as a joint venture between India and Sri Lanka”, things barely moved until 2003, when the Indian Oil Corporation set up Lanka IOC, its Sri Lankan subsidiary.

The facility, interestingly located in ‘China Bay’, has 99 storage tanks with a capacity of 12,000 kilolitres each, spread across the Upper Tank Farm and the Lower Tank Farm, where LIOC currently runs 15 tanks. The new agreement being negotiated pertains to the remaining tanks.

The “early modernisation” of the Trincomalee oil tank farms found mention in the official statement released by the Sri Lankan mission in New Delhi, on Finance Minister Basil Rajapaksa’s visit in November, indicating the priority accorded to it. The Finance Minister sought extensive economic assistance from New Delhi to help Sri Lanka tide over its economic crisis compounded by the pandemic.

Diplomatic sources indicated that New Delhi’s nod for the emergency Lines of Credit and currency swap requests from Colombo was contingent on the Rajapaksa administration moving forward on the Trincomalee deal.

However, dismissing the idea, Mr. Gammanpila said: “Some including the political opposition are suggesting that India’s economic assistance is tied to the Trincomalee deal. I vehemently deny that. We began negotiating this agreement well before the economic assistance was sought,” insisting “there is no connection whatsoever.”

It is nearly a month since Mr. Basil visited New Delhi, and the countries agreed to a “four-pronged approach” that would help Sri Lanka mitigate its current economic crisis. There is no official word on the assistance so far.