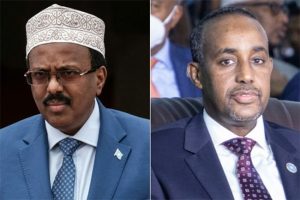 The raging, months-long dispute has seen both leaders trade allegations over the holding up of parliamentary elections, and is widely seen as distracting the government of the Horn of Africa country from fighting an Islamist insurgency.

It will also raise concerns about the prospect of renewed clashes between factions in the security forces allied to each side, prompting the United States to call for calm.

“The president decided to suspend [the] prime minister … and stop his powers since he was linked with corruption,” the office of the president said in a statement, accusing Roble of interfering with an investigation into a land grabbing case.

It added that the marine forces commander was also under investigation for corruption and had been suspended.

In response, Roble said the move was unconstitutional and aimed at derailing an ongoing election. He also ordered the security forces to start taking orders from him, instead of the president.

The steps taken by Mohamed “were an open coup attempt against the government and the national constitution”, Roble said in a statement posted on the Facebook page of Somalia state news agency SONNA.

“The aim of the illegal, crooked steps … is to derail the election and illegally remain in office.

Roble’s office also called the statement “outrageous”, saying on Twitter the attempt to “militarily take over” the office of the prime minister was in breach of the law.

In a separate post, his office said Roble remained “fully committed to fulfilling his national responsibility to conduct an acceptable electoral process that culminates in a peaceful transition of power.”

“What is going on this morning is [an] indirect coup but it will not win,” Adala said on Facebook, adding that the deployment of security forces around Roble’s office would not prevent the prime minister from carrying out his duties.

Speaking from Nairobi, Matt Bryden, political analyst at Sahan, a think tank focusing on the Horn of Africa, said: “Somalia has been in a constitutional crisis since February when the president’s mandate expired.

“The country has been held together by a political agreement between stakeholders of the federal government, federal member states and stakeholders in the elections,” Bryden told Al Jazeera.

“That was supposed to postpone the elections until today, December 27. That has not happened and that is why we are facing this crisis,” he added.

In a Twitter post later on Monday, the US embassy in Somalia said it “strongly” urged Somalia’s leaders “to take immediate steps to de-escalate tensions in Mogadishu, refrain from provocative actions, and avoid violence”.

The UK embassy in Somalia also urged in a tweet both sides to de-escalate and to refrain from violence.

The move by the president, who is widely known as Farmaajo, came a day after trading accusations with Roble of holding up ongoing parliamentary elections.

The long-delayed elections began on November 1 and were supposed to be completed by December 24, but one newly elected legislator said that, as of Saturday, only 24 of 275 representatives had been elected.

In a statement on Sunday, Farmaajo’s office said Roble was “posing a serious threat to the electoral process and overstepping his mandate”.

Roble’s office later on Sunday released its own statement, saying the president had spent “so much time, energy and finances in frustrating the national elections” and was “derailing the electoral process”.

In the statement, Roble said he would hold meetings to find ways to speed up the election and agree “on a capable leadership to spearhead timely and transparent elections” without offering more details on how long the process might take.

Under Somalia’s complex indirect electoral process, regional councils are meant to choose a senate. Clan elders are then meant to pick members of the lower house, which then picks a new president.

Farmaajo’s move reopens a confrontation that had been resolved when he put Roble in charge of security and of organising its first direct elections in more than 30 years.

Factions of the security forces allied to Mohamed and Roble in April had seized areas of the capital, as the prime minister and opposition opposed a move to extend the president’s four-year term by another two years.

Matt Bryden, analyst at the Sahan think-tank, told Al Jazeera that “the prime minister was planning to convene a national conference today to chart the way forward. Now the president has once again intervened and created a situation of real uncertainty and danger.”

Bryden added that the electoral model was modified by Farmaajo to favour his reelection and this change is now contributing to the impasse in the electoral process.

“The entire process has come down almost to cherry picking, where seat by seat we are seeing rigging, we are seeing appointees of the president being given seats, and these are the people who will choose the next president,” he said.

Somalia, which has had only a limited central government since 1991, is trying to reconstruct itself with the help of the United Nations and to fight the al Qaeda-linked al-Shabab armed group.