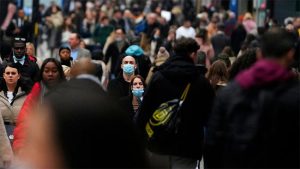 (Reuters) – Britain reported a record 129,471 new cases of COVID-19 on Tuesday, a day after Prime Minister Boris Johnson said he would not bring in new restrictions this year to limit the spread of the highly transmissible Omicron variant of the virus.

Johnson said on Monday he would not introduce new restrictions in England, but his ministers have urged people to celebrate the New Year cautiously and warned that the rules could be tightened if the health system was at risk of failure.

The British government manages lockdown restrictions for England, home to most of the UK population. Devolved authorities for Wales, Scotland and Northern Ireland have already tightened their rules, as have other European countries facing a surge in Omicron cases.

Tuesday’s data did not include figures for Scotland and Northern Ireland due to differences in reporting practices over the Christmas holidays. The 12,378 cases reported for Wales included data that would normally have been reported in previous days.

British ministers are waiting for more evidence on how the health service is able to cope with high infection rates after early data suggested last week that the Omicron variant carried a lower risk of hospital admission.

The latest data showed the number of patients in hospital in England with COVID-19 was 9,546, up from 6,902 a week ago, but well below record levels above 34,000 seen in January.

Britain’s high vaccination rates, the time lag between infections and hospitalisations, and the potentially less harmful effects of the Omicron variant have all been put forward by health experts as factors behind the lower hospital numbers.

The government said on Tuesday there had been 18 new deaths within 28 days of a positive COVID-19 test – well below the recent trend of more than 100 per day.

Omicron estimated to be 58.6% of Coronavirus variants in US

(Reuters) – The Omicron variant was estimated to be 58.6% of the coronavirus variants circulating in the United States for the week ending Dec. 25, according to data from the U.S. Centers for Disease Control and Prevention (CDC).

The fast-spreading variant was first detected in southern Africa and Hong Kong in November, with the first known case in the United States identified on Dec. 1 in a fully vaccinated person who had traveled to South Africa.

The agency also revised down the Omicron proportion for the week ending Dec. 18 to 22% from 73%, saying that there was a wide predictive interval posted in last week’s chart, in part because of the speed at which Omicron was increasing.

The Delta variant accounts for 41.1% of all U.S. COVID-19 cases as of Dec. 25, according to the public health agency’s data on Tuesday https://covid.cdc.gov/covid-data-tracker/#variant-proportions.

Former U.S. Food and Drug Administration Commissioner Scott Gottlieb said on Twitter that if the CDC’s new estimate of Omicron prevalence is precise then it suggests that a good portion of the current hospitalizations may still be driven by Delta infections.

The agency said the data includes modeled projection that may differ from weighted estimates generated at later dates.