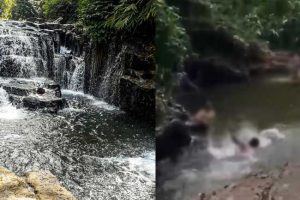 The body of one of the three females who were reported missing while bathing at Kumari Ella in Hanwella last evening (December 30) has been recovered, the police said.

The remains of the deceased are currently placed at the Avissawella Base Hospital. She was identified as a 16-year-old from Jaffna.

Search operations are in progress to locate the other two females, aged 14 and 29 years, who went missing along with the deceased teen.

Two young boys and five girls had been bathing at the Kumari Ella when the water level rose sharply following the heavy rainfall in the area.

Sri Lanka Police, Army and the residents of the area had jointly launched a search and rescue mission last night. – ada derana