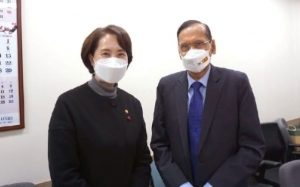 Minister Peiris expressed appreciation of the benefits derived by Sri Lanka from these programmes, the foreign ministry said in a statment.

The Foreign Minister, referring to the 22,000 Sri Lankans employed in the Republic of Korea, mentioned the popularity of teaching programmes directed at proficiency in the Korean language in Sri Lanka.

He said that the Korean language had been adopted as a subject for the G.C.E. (Advanced Level) Examination in Sri Lanka in 2023.

Deputy Prime Minister Yoo Eun-hae, responding to Foreign Minister Peiris, said that the Government of South Korea would consider extensive assistance for initiatives in the field of vocational education and training in Sri Lanka. – ada derana