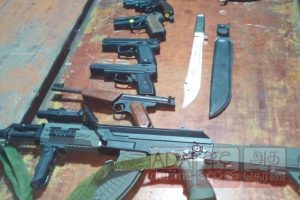 The police have recovered a cache of weapons from the residence of the retired doctor in connection with the hand grenade found inside All Saints’ Church in Borella recently.

According to reports, seized weapons included four pistols, a revolver, a Rambo knife, 2 swords and an unidentified firearm.

The retired doctor was apprehended in the area of Piliyandala by the crimes investigation unit of the Colombo South Division, based on the information divulged by another suspect, who was arrested in Panamura, Embilipitiya. – ada derana