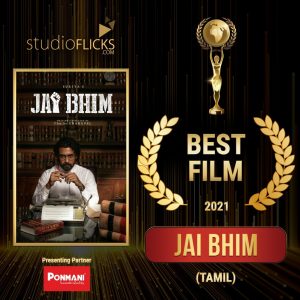 The Tamil film industry has turned the global spotlights in 2021 for releasing an array of impeccable movies based on unique content-driven and new-fangled story premises. Studioflicks, one of the leading online entertainment news portals has announced its Tamil Film Awards 2021 in 23 categories. Actor Dhanush has bagged the ‘Best Actor Award’ for his spellbinding performance in Karnan, and Lijomol Jose for her stellar acting in Jai Bhim. Actor Suriya’s production Jai Bhim has been honoured with ‘Best Film’. Best Supporting Actor Male has been awarded to Manikandan for Jai Bhim, and Best Supporting Actor Female for Sri Ranjani (Vinodhaya Sitham). Filmmaker Venkat Prabhu has been awarded Best Screenplay and Direction for his colossal work in Maanaadu.

Suresh Kumeresan, Founder, Studioflicks said, “The year 2021 has been a special year for Tamil film buffs indeed. Despite the lockdown hampering the routine culture of cinema halls, our industry has managed to deliver outstanding results in both theatrical and OTT releases. In particular, many films have worked out best results beyond the linguistic and regional boundary factors. We wanted to honour the best actors and technicians based on 23 different categories. We are happy that the actors and technicians acknowledged our honour by sharing their thanksgiving note on their respective social media pages”.

Initially, Studioflicks Film Awards was scheduled as a live event, was limited to the virtual mode due to the current pandemic situation. – newswire