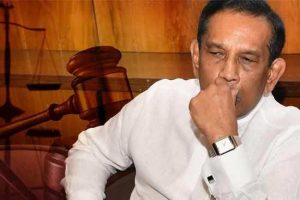 The lawsuit against MP Rajitha Senaratne and former State Pharmaceutical Corporation (SPC) chairman Mohamed Rumi pertaining to the controversial media briefing convened in 2019 on “white van abductions” has been fixed for hearing by the Colombo High Court.

Accordingly, the case is scheduled to be taken up starting from March 15.

It was called before Colombo High Court Judge Damith Thotawatta this morning.

Representing MP Senaratne, President’s Counsel Anil Silva told the court that the defense is yet to examine the computer-generated evidence in the case and that it plans to raise objections in this regard.

The HC judge then announced that the lawsuit would be taken up on February 18 to decide its future course of action.

Subsequently, the hearing of the case will begin on March 15.

In the days leading up to the Presidential Election in 2019, former Health Minister Rajitha Senaratne had called two persons named Anthony Douglas Fernando and Athula Sanjeewa Madanayake for the said press conference, where they made controversial statements regarding alleged “white vans” and purported incidents of certain abductions, assassinations, robberies and forced disappearances during the administration of former President and incumbent Prime Minister Mahinda Rajapaksa.

One of them had claimed that he was a “white van” driver involved in abducting people while the other claimed he once served as a driver to transport a stock of gold in previously LTTE-held areas.

The former Health Minister was arrested in December 2019 and was remanded over the controversial “white van” press conference organized by him, but he continued to receive medical treatment at the hospital.

On December 30, Colombo Magistrate’s Court ordered to release Senaratne on bail. However, the Attorney General had filed a revision application on January 08 challenging the decision of the Magistrate Court to grant bail to the former Health Minister. – ada derana