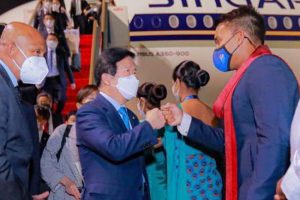 Accompanied by a delegation, Park has reached the island nation last night (January 19) in a flight belonging to Singapore Airlines, according to Ada Derana correspondent.

Park is scheduled to meet with his Sri Lankan counterpart, Speaker of Parliament Mahinda Yapa Abeywardena, as well as President Gotabaya Rajapaksa and Prime Minister Mahinda Rajapaksa during the four-day visit.