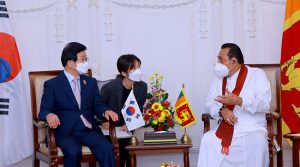 The Prime Minister made the request during a meeting with the Speaker of the National Assembly of South Korea Park Byeong-seug recently at Temple Trees. Speaker Park is the first South Korean speaker to visit Sri Lanka in 10 years.

The Korean Speaker responded positively to the request stating, “I’m pleased that young, talented Sri Lankan workers have contributed to income growth of both our countries.”

Speaker Park thanked the Prime Minister for supporting the vaccination of the South Korean community in Sri Lanka and for including the Korean language as a foreign language in the Advance Level curriculum.

Speaker Park also suggested that the two countries explore cooperation in the areas of climate change and renewable energy resources.

This year, Sri Lanka and South Korea are celebrating 45 years of establishing diplomatic relations. Speaking about the many years of close cooperation between the two countries, Speaker Park said, “I hope this visit will be a catalyst for a new chapter of prosperity.” – ada derana