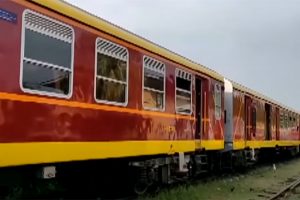 The Railway Trade Union Alliance has highlighted a 2018 purchase of 160 Indian railway carriages at a cost of over USD 80 million that now lie in various states of corrosion and disuse.

They also claimed that the carriages cannot be run on the upcountry line due to their 65-foot length, prompting a response from Bus Transport Services and Train Compartments Dilum Amunugama to the contrary.

Calling a media briefing, the alliance exposed what they said were “acts of serious fraud” in the purchase of railway carriages from India.

However, despite crying foul over the issue now, damages have already been done with a deal inked in 2018 for 160 carriages and deliveries having continued up to last year.

Addressing the media on Wednesday, the convenor of Railway Trade Union Alliance, S.P. Vithanage revealed that Indian-constructed carriages had been purchased for a price between USD 500 and USD 800,000 each, depending on the type.

A total of 160 carriages were purchased from India, using a special credit line at a cost of over USD 80 million.

“If we had the means to manufacture these carriages locally, our cost would have been only around Rs. 45-50 million each.”

He also alleged that the 160 carriages imported from India were not really necessary for the Railway Department as it already sufficient carriages in stock.

“These carriages have several issues with them, namely that they have been constructed using inferior metal materials. Hence, they are already in a state of corrosion, the plates have already started coming off due to rivets coming loose, and there are a host of problems with them. However, the biggest issue is that they cannot be run on all of the Railway Department’s tracks, especially on the upcountry line, as they are all 65 feet in length. The upcountry line cannot accommodate 65-foot carriages. In addition, I must state that these carriages were purchased at a time the Railway Department did not really have a need for them.”

However, the government rejected the claims that the carriages cannot be used. State Minister Dilum Amunugama stressed that all the compartments can in fact be put into operation.

He added that the dilapidated state of the carriages can be attributed to the failure of the Railway Department including the General-Manager of Railways to protect them over the past four months. – ada derana