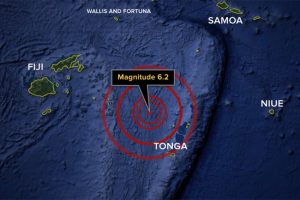 A magnitude 6.2 earthquake has been recorded off the coast of Tonga almost two weeks after the Pacific kingdom was devastated by a volcanic eruption and tsunami.

The epicentre was located 219km (136 miles) northwest of Pangai, a town on the remote island of Lifuka, at a depth of 14.5km (9 miles), according to United States Geological Survey (USGS) data.

There have been no immediate reports of damage but communication is limited after the earlier eruption severed the main underwater cable connecting Tonga to the world.

The area has seen daily earthquake activity since the Hunga-Tonga-Hunga-Ha’apai volcano erupted on January 15, killing three people and sending a tsunami across the wider Pacific.

The volcanic event, the biggest since Pinatubo in the Philippines in 1991, released a huge ash cloud that blanketed the Pacific island nation and prevented surveillance to determine the extent of the damage.

There are an estimated one million undersea volcanoes that, like continental volcanoes, are located near the Earth’s tectonic plates where they form.

According to the Global Foundation for Ocean Exploration group, about “three-quarters of all volcanic activity on Earth actually occurs underwater”.

In 2015, the Hunga-Tonga-Hunga-Ha’apai spewed so many large rocks and ash into the air that it led to the formation of a new island.

On December 20 and then on January 13, the volcano erupted again, creating ash clouds that could be seen from the Tonga island Tongatapu.

On January 15, the massive eruption triggered a tsunami around the Pacific, in a process whose origins are still debated among scientists.

Satellite images showed a plume of ash, steam and gas rising like a mushroom above the blue Pacific waters, with a sonic boom heard as far away as Alaska.

In Tonga, it sent tsunami waves crashing across the shore, forcing people to rush to higher ground.