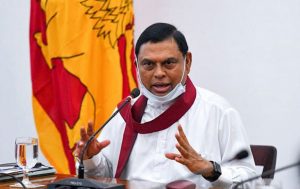 Sri Lanka is negotiating debt relief with international bondholders and is weighing an approach to the IMF, as the country struggles with a foreign reserve crisis that has left it close to default, the Financial Times reported.

Basil Rajapaksa, finance minister, told the Financial Times in an interview that the government was “negotiating with everybody” and “trying all our options” to avoid default and alleviate the economic crisis.

“We have [international sovereign bonds] which we have to repay back, so we are negotiating with them. Then we have creditors and we have to service their debt, so whether we can have an adjustment or some type of thing,” he said.

Rajapaksa added that the government would “think about a programme with the IMF . . . All those discussions are going as well.”

Sri Lanka has almost $7bn in debt payments due this year but less than $3bn of foreign reserves.

Some Sri Lankan officials have insisted that the country can avoid this fate by boosting foreign currency reserves through tourism and exports while securing additional assistance from China and India, two of its largest benefactors. The central bank governor this week told CNBC that “we don’t need relief” from the IMF.

Minister Rajapaksa insisted the government could manage but was preparing for contingencies. “I know it’s very difficult because we have to pay this year $6.9bn and, additional to that, we have to find money for medicine, raw material, fuel, all these things,” he said.

Asked if he was negotiating a restructuring with bondholders, Rajapaksa replied, “something like that”.