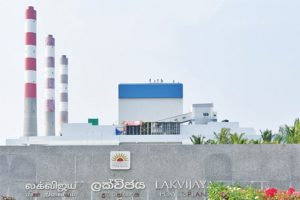 The Ceylon Electricity Board (CEB) says the third generator at the Lakvijaya Power Plant in Norochcholai has been repaired after it broke down last month.

Accordingly, 160 MW of electricity has been added to the national grid.

This generator, which adds 300 MW of electricity in total to the national grid, experienced a sudden malfunction in early December, 2021.

Following the breakdown, the Kelanitissa power plant had been supplying 300 MW of electricity to the national grid, in lieu of the 3rd generator at the Lakvijaya power plant.

Meanwhile, the Public Utilities Commission of Sri Lanka (PUCSL) says it expects to convene a meeting later today to review the situation and to decide whether interruptions to the power supply are needed.

On January 27, the PUCSL stated that scheduled interruptions to the electricity supply until today after reviewing the situation at power plants and the availability of fuel stocks required by them.

According to reports, stocks of fuel required for power generation are being supplied to power plants. – ada derana