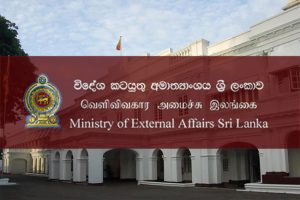 In a statement, the ministry said its attention has been drawn to a news item that appeared on a local news website, titled “We purchased weapons from North Korea using Black Market Dollars’ – Minister Basil R” dated 31 January 2022.

Foreign Minister Prof. G. L. Peiris has spoken in this regard with Finance Minister Basil Rajapaksa who has categorically denied the comments attributed to him in the said news item, the Foreign Ministry noted. – ada derana