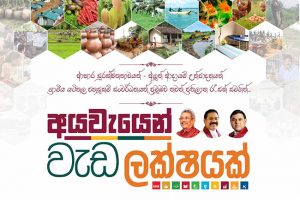 It aims to boost the production economy, covering all 14,021 Grama Niladhari areas in 336 Divisional Secretariat divisions across the island.

Under this project, the identification process is completely decentralized to enable the public to recognize their needs themselves.

On January 31, the Cabinet of Ministers gave the go-ahead to the submissions made by the finance minister with regard to the arrangements to kick off the program.

Minister Basil Rajapaksa, who spoke on the “Weda Lakshayak” initiative during an event held yesterday, stated that a budgetary allocation of Rs. 85 billion has been made for this project. – ada derana