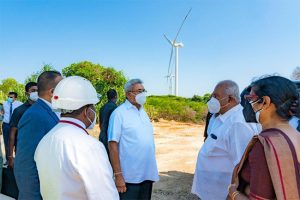 The “Thambapavani” wind farm project commenced in 2014 with the aim of empowering the country with electricity, providing a stable power supply and accelerating the development process.

The power plant is located on 150-hectare land, 13 km off the coast of Mannar, which faces both major monsoon winds.

The power plant has 30 towers with a turbine height of 90 meters. The diameter of the rotating blades (windmills) is 126m and the wind turbines generate 3.45 MW of electricity. The project includes a 36km transmission system to Nadukuda Green Sub-Station and Pudukaman in Mannar. The total power capacity 103.5 MW.

The Ceylon Electricity Board says that the cost of generating a unit of electricity from this system is less than Rs. 8.00.

This eco-friendly, state-of-the-art wind farm with a number of specialized technologies for optimal power supply is considered a milestone in the journey towards renewable power generation.

Plans have been made to add another 50 megawatts to the national grid from the Thambapavani Wind Power Plant. President Rajapaksa inquired about the progress of this and instructed the officials to prepare a report immediately on the locations where new wind farms could be built. At present, 248 MW are added to the national grid by wind power plants. The purpose of the visit was to explore the possibility of increasing this in a short period of time and the President inspected all the operations of the power plant.

Minister of Power Gamini Lokuge, State Minister Duminda Dissanayake, Principal Advisor to the President Lalith Weeratunga, Secretary to the Ministry of Power Wasantha Perera, Secretary to the State Ministry K.H.D.K. Samarakoon, Vice Chairman of the Ceylon Electricity Board Nalinda Illangakoon, Acting General Manager Rohantha Abeysekara and a number of officials joined the President in the visit.