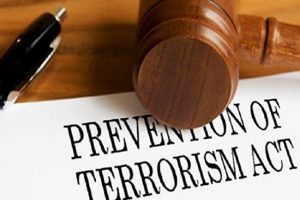 The government of Sri Lanka says the proposed Bill to amend the present Prevention of Terrorism Act (PTA) is a progressive step that would give persons subject to the said law, tangible protection towards securing, advancing and protecting their fundamental rights guaranteed under the Constitution.

Defending the proposed Bill, the government noted that it would be a salutary piece of legislation that would amend the existing Act, after almost 43 years since it was enacted.

These remarks were contained in a statement published by the Foreign Ministry on Monday (Feb. 07).

Against this backdrop, a report issued by the Human Rights Watch on the same day alleged that the Sri Lankan government is using the PTA to commit “prolonged arbitrary detention and torture.”

The New York-based international rights organization urged the European Union, other trading partners, and donors to press for time-bound action to repeal “the abusive law” and reject the government’s proposed amendments.

The HRW said the report is based on its research on the PTA carried out since 2018, interviews conducted between January and December 2021, and a review of newly available court documents.

However, the Sri Lankan government reiterated that this is an important move towards the realization of enforcing international best practices to address counter-terrorism legislation.

It added that attempts in the past to amend the present PTA, through the Counter-Terrorism Bill, did not materialize in view of strong opposition to the proposed Bill before the Supreme Court by several persons including trade unions and civil society organizations.

The statement also explained the process followed to finalize the amendments to the PTA, which included a Joint Cabinet Memorandum that was submitted in June 2021 by the President as the Minister of Defence, Foreign Minister and Minister of Justice, titled Appointment of a Cabinet Sub Committee to revisit the Prevention of Terrorism (Temporary Provisions) Act No. 48 of 1979.

Following the receipt of Cabinet approval, the Secretary to the President appointed an Officials’ Committee in June 2021, which consisted of officials from the Ministries of Justice, Public Security and Foreign Affairs, Defence as well as the Police, AG’s Department, Legal Draftsman and the Chief of National Intelligence, it continued.

Further, extensive consultations were conducted among different ministries and agencies in the context of the Officials Committee, where further expertise was called from additional institutions relating to the matters of discussion, the statement detailed.

Having reviewed the proposals of the Officials’ Committee, the Cabinet Sub Committee conducted further consultations with selected Parliamentarians and other government agencies and experts.

The Cabinet Sub Committee also conducted discussions on the proposed amendments to the PTA with the Law Commission of Sri Lanka, Bar Association of Sri Lanka and civil society groups. Proposals were received for consideration verbally and through written submissions, the statement said further.

The amendments include reduction of the period of detention, Magistrate expressly empowered to visit places of detention of the suspects in the detention to address and eliminate allegations of torture, express recognition of Judicial review of acts under the PTA, Attorneys-at-Law to have access to a person in remand or in detention and right of the person so remanded or detained to communicate with his relatives, repeal of provisions regarding prohibition of publications, the conduct of trials on a day to day basis for offences under the PTA, to ensure the expeditious disposal of cases and the introduction of a new Section 15B to make provision to grant bail to persons in remand or in detention under the PTA.

The Bill was published in the Government Gazette on 27 January this year. Thereafter, the Foreign Minister as the Chair of the Cabinet Sub-Committee, wrote to the Leader of the House in the Parliament requesting to table the Bill in the Parliament.

“It may be noted that the Prevention of Terrorism (Temporary Provisions) Act, No. 48 of 1979 has been in operations since its certification in Parliament on 24 July, 1979 and was subject to minor amendments in 1982 and 1988,” the statement read.

Therefore, the Foreign Ministry stated that the proposed amendment, after much deliberation, is “a progressive step in advancing, securing and protecting the rights of persons subject to investigation and judicial review under the said law and is an important move towards the realization of enforcing international best practices to address counter-terrorism legislation.” – ada derana