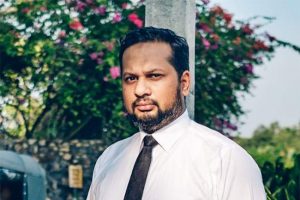 Attorney-at-Law Hejaaz Hizbullah, who was held in custody under the Prevention of Terrorism Act (PTA), returned home today after nearly two years.

He was granted bail by the Appeals Court judge bench comprising Justices Menaka Wijesundera and Neil Iddawela, after accepting a motion filed on behalf of Mr. Hizbullah seeking his release on bail.

When Mr. Hizbullah was produced before the Puttalam High Court earlier today, he was released on a cash bail of Rs 100,000 and two sureties to the value of 500,000 each.

He was also ordered to report to the DIG/SSP of Puttalam Police Division every 2nd and 4th Sunday of every month.

Meanwhile, his passport has been surrendered to the Puttalam High Court.

Hejaaz Hizbullah was arrested on April 14, 2020 under the PTA iin order to be questioned regarding the Easter Sunday attacks. He was accused by the police of aiding and abetting Inshaf Ahamed, who was involved in the April 21, 2019 bombings. His detention had been extended for over 20 months. – ada derana