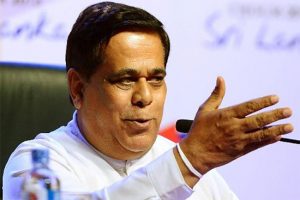 Minister of Labour Nimal Siripala de Silva says that the issue surrounding the new Surcharge Tax Bill covering the Employees Provident Fund (EPF) and the Employees’ Trust Fund (ETF), is down to the interpretation of the bill given by the chief of Inland Revenue Department (IRD).

He told parliament, that the new gazette is not the source of the problem, and it goes even further back than the Budget 2022.

“The Inland Revenue Department gave an interpretation before the budget, which said that as per the relevant Act, since the returns from EPF and ETF investments are an income, it must be taxed.”

The new Bill on Surcharge Tax that charges 25% from companies and individuals having an income in excess of Rs.2 billion, was gazetted on Monday (Feb. 07).

The Bill mooted by the Minister of Finance during the Budget 2022 has attracted criticism from the opposition.

As per the Bill, any individual, partnership or company with taxable in excess of Rs. 2 billion for the year of assessment starting from April 01, 2020, will be charged a 25% surcharge tax on their taxable income.

However, the biggest concern is that the bill also covers the Employees Provident Fund (EPF) and the Employees’ Trust Fund (ETF), especially with two funds containing public money.

Tax experts stated that the definition of the word “company” as per the Inland Revenue Act also includes the EPF and the ETF, and as such the two funds are liable for surcharge tax.

When the matter was raised in parliament today, Opposition Leader Sajith Premadasa alleged that the government is attempting to pickpocket the hard-earned money of the public. – ada derana