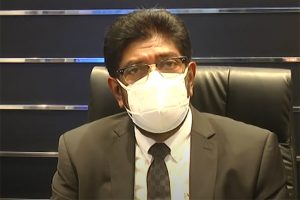 Minister of Health Keheliya Rambukwella says he is hopeful that the health workers on strike will call off their trade union action, in compliance with the enjoining order issued by the court.

The lawmaker stressed that the health ministry would take immediate action within the existing legal framework for strikes that causes inconvenience to the public.

Last evening, the District Court of Colombo issued two enjoining orders against the Government Nursing Officers’ Association and its chairman Saman Ratnapriya calling for the immediate suspension of their trade union action.

The enjoining orders were issued after taking into account a request made by the Attorney General. He had filed action against the said union and its chairman, seeking an enjoining order from the court to immediately suspend the trade union action of the said association.

The Attorney General also appraised the court of the current deplorable conditions at hospitals due to patient care has been gravely affected.

Meanwhile, the chairman of Association of Medical Laboratory Scientists and Professionals Ravi Kumudesh said the trade unions are yet to be informed of this enjoining order.

Speaking in this regard, Saman Ratnapriya stated that it is a constitutional right to engage in strikes and that his union has not done anything illegal. – ada derana