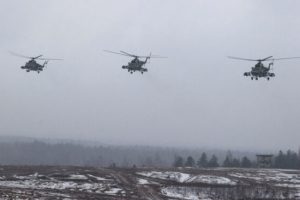 Ukrainian President Volodymr Zelensky on Thursday declared his country’s armed forces were fighting hard to repel a Russian attack that began before dawn.

Zelensky was quoted by Ukraine’s Interfax news agency as saying “Ukraine’s armed forces are fighting really hard, repelling attacks in Donbass, other regions in the east, north, south. The enemy has suffered serious losses, the enemy will suffer even more. They came to our land.”

Meanwhile, Ukraine’s defence ministry claimed a total of six Russian Air Force aircraft and two helicopters had been shot down since the attack began. The defence ministry tweeted two tanks had also been destroyed and “about 50 Russian occupiers” killed. Media reports said two Su-24 jets, which are light bombers, were among the aircraft shot down.

Oleksiy Arestovych, an adviser in the Zelensky government, was quoted by Interfax as saying more than 40 people had died and “several dozen wounded” since the Russian attack began.