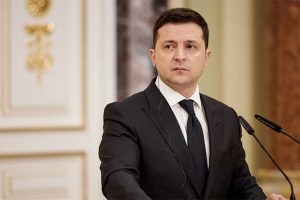 President Volodymyr Zelenskyy has criticised Western nations for not coming to Ukraine’s aid, saying his country has been left alone to fight the invading Russian forces.

A series of pre-dawn explosions in Ukraine’s capital, Kyiv, set off a second day of fighting after Russian President Vladimir Putin defied Western warnings to unleash a full-scale invasion on Thursday that quickly killed dozens of people and displaced at least 100,000.

The United States and its allies responded with a barrage of sanctions, but the Russian forces looked to press home their advantage after a string of key strategic victories in their air and ground assault.

“We’re defending our country alone. The most powerful forces in the world are watching this from a distance,” Zelenskyy said, noting that new packages of sanctions did not go far enough. “Did yesterday’s sanctions impress Russia? We hear in the sky above us and on our land that it’s not enough.”

Zelenskyy said that 137 civilians and military personnel were killed in the country on the first day of the Russian invasion. He also said 316 people had been wounded.

“Defending the Zmiinyi island, all our border guards died a heroic death. But they have not surrendered. They will all be awarded posthumously the title of the Hero of Ukraine. Let those who gave their lives for Ukraine be remembered forever,” Zelenskyy said.

Zelenskyy also declared that he is still in Ukraine, despite Russia wanting to “destroy Ukraine politically by taking down the head of state. I am staying in the government quarter together with others. The enemy has designated me as the target number one, and my family as the target number two.”