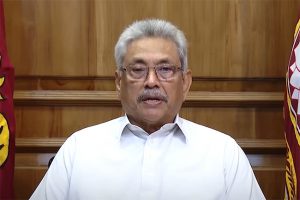 President Gotabaya Rajapaksa says that a devastating situation that could be emerged in the country has been brought under control by implementing COVID-19 vaccination programme.

The President made these remarks addressing the High-Level Thematic Debate on ‘Galvanising Momentum for Universal Vaccination’ held at the General Assembly Hall, United Nations Headquarters, yesterday (Feb. 25), via video link.

“The emergence of new variants of concern remains a dangerous possibility while availability of vaccines remains uneven globally. As I stated in my address to the General Assembly last year, ensuring everyone, everywhere, is vaccinated is the best way out of the pandemic,” the President said.

President of the UN General Assembly Mr. Abdulla Shahid and the Secretary-General of the United Nations António Guterres expressing their views at the beginning of the debate pointed out the importance of vaccination and how different states have acted on it.

During the first round of the Debate, existing challenges in vaccine production and distribution, optimizing quality, improving absorption capacity and delivery rates in low-coverage countries, and ensuring supply predictability were highlighted and reviewed.

The second round focused on identifying innovations and solutions needed to overcome current challenges and work towards universal vaccination.