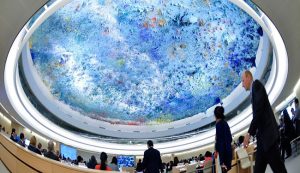 Heads of state and other dignitaries representing more than 140 countries will address the U.N. Human Rights Council over the next three days. Quite unusually, this high-level segment will begin with a consideration of a request from Ukraine to hold an urgent debate on the “situation of human rights in Ukraine stemming from the Russian aggression.”

The council’s president, Argentinian Ambassador Federico Villegas, told journalists in Geneva that an urgent debate can take place as soon as the 47-member body decides to do so.

“And has to make a decision according to the rules of procedure, which is a consensus or a vote with a majority of positive votes over negative votes. … We had the most recent, I am sure you are very much aware in 2020, Belarus was an urgent debate, and the killing of George Floyd was also an urgent debate,” he said.

During the session, the council will consider more than 100 reports dealing with issues such as torture, forced disappearances, extrajudicial killings, and arbitrary detention. The human rights records of some 50 countries in all regions will be examined. They include Myanmar, North Korea, Syria, Ethiopia, Democratic Republic of the Congo, South Sudan, Nicaragua, and Venezuela.

Human rights organizations are pressuring U.N. High Commissioner for Human Rights Michele Bachelet to present a long-awaited report on China’s incarceration of more than a million Uyghurs in internment camps in Xinjiang province.

The United States, France, and Lithuania have denounced Beijing’s wide-scale repression of Uyghurs as a genocide. China vigorously denies these accusations.

The session will open under the presidency of Federico Villegas (Argentina). Speeches will be delivered by the Secretary-General of the United Nations, Antonio Guterres, the President of the United Nations General Assembly, Abdulla Shahid, the United Nations High Commissioner for Human Rights, Michelle Bachelet, and the Chief of the Federal Department of Foreign Affairs of Switzerland, Ignazio Cassis.

The UN Human Rights Council’s 49th session will run through April 1. The Council will consider over 100 reports presented by more than 30 human rights experts and groups. These presentations will address around 50 country situations and 40 themes, including the human rights dimensions to the COVID-19 pandemic.

While there will be no resolution on Sri Lanka this session, an interactive dialogue on the progress made by Sri Lanka in promoting reconciliation, accountability, and human rights is expected to be held during the week.

Sri Lanka’s foreign ministry said that during the Session the UN High Commissioner for Human Rights will present a written update on Sri Lanka to the Council and there will be an Interactive Dialogue on Sri Lanka on 3 March, 2022.

The Foreign Minister is also scheduled to have meetings with the UN High Commissioner for Human Rights and other dignitaries during his visit, the ministry said.

-With inputs from agencies