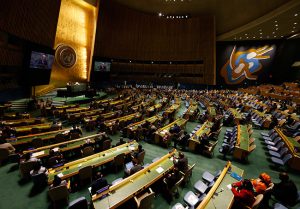 United Nations — The United Nations General Assembly will meet Monday for a rare Emergency Special Session to discuss the Russian invasion of Ukraine.

The U.S. and Albania requested a Sunday Security Council meeting to vote to convene the emergency General Assembly session, the first of its kind in 40 years and only the 11th such session in U.N. history.

The 15-member Security Council approved the General Assembly emergency session with 11 votes in favor and 3 abstentions, with only Russia voting against it. Russia’s no vote did not prevent the measure from being adopted since it was a procedural vote. Russia’s presidency of the Council – which alternates among Council members monthly – ends on Monday.

The vote was the latest U.N. effort to isolate Russia diplomatically – there is not much the Security Council can do that would be enforceable during the conflict in Ukraine because Russia holds veto power.

Speaking to the press following the weekend meeting, French U.N. Ambassador Nicolas De Rivière announced that there will be a Security Council meeting Monday on the humanitarian needs in Ukraine. He said France and Mexico will propose a resolution to seek more access to deliver humanitarian aid.

“This crisis is a very tragic one and I think we really need such a meeting, as soon as possible, we need to provide support to Ukraine,” France’s U.N. envoy said.

General Assembly action, which is unenforceable, is intended to show that the global community is shocked by the unprovoked attack by Russia on Ukraine, the U.K.,France and the U.S. said.

Ukraine’s ambassador, Sergiy Kyslytsya, said Sunday that Ukraine is willing to meet for talks with Russia but, quoting his foreign minister, he stressed, “Ukraine will not capitulate.”

After the vote, U.S. Ambassador to the U.N. Linda Thomas-Greenfield told diplomats that “the Security Council has taken an important step forward toward that accountability. For the first time in decades, it has called for an Emergency Special Session in the General Assembly. The Council members who supported this resolution recognize that this is no ordinary moment.”

“We need to take extraordinary actions to meet this threat to our international system and do everything we can to help Ukraine and its people,” she said. “President Putin put Russia’s nuclear forces on high alert, even though he is invading a country with no nuclear weapons and is under no threat from NATO,” she added.

To Russian officers and soldiers, Thomas-Greenfield said:  “The world is watching.”

Earlier Sunday, Thomas-Greenfield told “Face the Nation” moderator Margaret Brennan that Putin’s nuclear order is “totally unacceptable” and said the U.N would use “every possible lever we have at our disposal to expose” Putin’s actions.