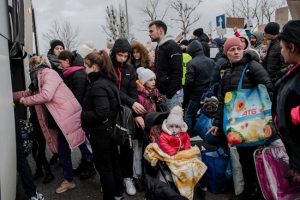 The U.N. refugee agency said Thursday that 1 million people have now fled Ukraine since Russia’s invasion less than a week ago, an exodus without precedent in this century for its speed.

The tally from the U.N. High Commissioner for Refugees amounts to more than 2% of Ukraine’s population — which the World Bank counted at 44 million at the end of 2020 — on the move across borders in just seven days. The agency cautions that the outflows are far from finished: It has predicted that as many as 4 million people could eventually leave Ukraine, and even that projection could be revised upward.

In an email, UNHCR spokeswoman Joung-ah Ghedini-Williams wrote, “Our data indicates we passed the 1M mark” as of midnight in central Europe, based on counts collected by national authorities.

On Twitter, U.N. High Commissioner Filippo Grandi wrote, “In just seven days we have witnessed the exodus of one million refugees from Ukraine to neighboring countries.”

Grandi appealed for the “guns to fall silent” in Ukraine so humanitarian aid can reach millions more still inside the country.

Grandi’s comments testified to the desperation of Ukrainians as artillery fire, exploding mortar shells and gunfire echoed across the country, and the growing concerns across the U.N. system at agencies like the World Health Organization and the U.N. Office for the Coordination of Humanitarian Affairs — which launched an appeal for funds with UNHCR on Tuesday.

The day-by-day figures pointed to the dizzying speed of the evacuation: After more than 82,000 people left on the first day of the Russian invasion on Feb. 24, each day after that tallied at least 117,000 new refugees, hitting a peak of nearly 200,000 on Tuesday alone, based on the latest UNHCR count. Some longtime staffers accustomed to dealing with refugee crises said they’d never seen anything like this exodus.

Syria, whose civil war erupted in 2011, remains the country with the largest refugee outflows — nearly 5.7 million people, according to UNHCR’s figures. But even at the swiftest rate of flight out of that country, in early 2013, it took at least three months for 1 million refugees to leave Syria.

Two years later, in 2015, hundreds of thousands of Syrian and other refugees who had mostly been in Turkey fled into Europe, prompting disarray in the European Union over its response and at times skirmishes and pushbacks at some national borders.

So far, U.N. officials and others have generally praised the response from Ukraine’s neighbors, who have opened homes, gymnasiums and other facilities to take in the new refugees.

UNHCR spokeswoman Shabia Mantoo said Wednesday that “at this rate” the outflows from Ukraine could make it the source of “the biggest refugee crisis this century.”

According to the latest figures on UNHCR’s online data portal, which still showed 934,000 refugees early Thursday, more than half of the refugees from Ukraine had gone to neighboring Poland — over 505,000 — and more than 116,000 had gone to Hungary to the south. Moldova had taken in more than 79,000 and 71,200 had gone to Slovakia.

Ghedini-Williams said the figures on the data portal reflected a count through mid-afternoon in Europe, but the agency had received estimates of additional arrivals through the rest of the day and into the evening.