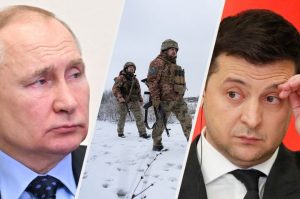 Russia and Ukraine have agreed to a temporary ceasefire in Ukraine to allow civilians to leave the cities of Mariupol and Volnovakha.

The ceasefire was expected to begin at 10 a.m. Moscow time (2 a.m. ET) Saturday.

A Ukrainian official tweeted that “humanitarian corridors” were being prepared.

“In Mariupol and Volnovakha, evacuation humanitarian corridors are being prepared for opening, and columns of those to be evacuated are being formed. The parties temporarily ceased fire in the area of corridors,” Mykhailo Podoliak, an advisor to the Ukrainian Presidential Office who took part in negotiations with Russian officials this week, said on Twitter.

Mariupol and Volnovakha have borne the brunt of some of the most intense fighting in Ukraine over recent days.

Their location — in Ukraine’s extreme southeast corner, near the Russian border and Crimea — makes them strategic targets for Moscow. If they fell to Russia, its troops could join forces with those in Crimea, a peninsula Moscow seized from Ukraine in 2014.

Mariupol is a port city, on the Sea of Azov.

Both cities are within Donetsk, one of two Ukrainian regions that Russian President Vladimir Putin’s government recognized as independent just before his troops invaded Ukraine.

On Thursday, the BBC reported that Moscow had encouraged residents of Mariupol to begin leaving the city, but residents said they could not move because there had been no break in the shelling.

The situation on the ground in Ukraine is extremely volatile, and individual accounts are difficult or impossible to verify.