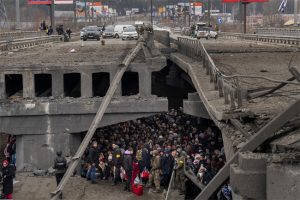 Civilian evacuations were halted in two cities in southern Ukraine because of continuing attacks after Russia announced a temporary ceasefire to allow more than 200,000 people to escape the fighting.

Russia earlier on Saturday said its forces stopped firing near the cities of Mariupol and Volnovakha to allow safe passage to civilians, but Ukraine officials accused Russian troops of breaking the partial truce.

“The Russian side is not holding to the ceasefire and has continued firing on Mariupol itself and on its surrounding area,” said Kyrylo Tymoshenko, deputy head of President Volodymyr Zelenskyy’s office.

“Talks with the Russian Federation are ongoing regarding setting up a ceasefire and ensuring a safe humanitarian corridor.”

The Russian defence ministry said its units opened humanitarian corridors near Mariupol and Volnovakha, which were encircled by its troops, Russia’s RIA news agency reported.

In Mariupol, citizens would be allowed to leave during a five-hour window, it quoted the city’s officials as saying.

The Ukrainian government said the plan was to evacuate about 200,000 people from Mariupol and 15,000 from Volnovakha, and the Red Cross is the ceasefire’s guarantor.

However, the evacuation was later delayed.

“Due to the fact that the Russian side does not adhere to the ceasefire and has continued shelling both of Mariupol itself and its environs and for security reasons, the evacuation of the civilian population has been postponed,” city officials said in a statement on social media.

No water, heat or electricity

Aid agencies have warned of an unfolding humanitarian disaster in the area as food, water and medical supplies run short and refugees stream into western Ukraine and neighbouring European countries.

In Mariupol – whose capture would be a key prize for Russia – there is no water, heat or electricity and food is running out, according to Mayor Vadym Boychenko.

“We are simply being destroyed,” he said.

Zelenskyy, earlier on Saturday, said: “Humanitarian corridors must work today … to save people – women, children, the elderly. To give food and medicine to those who remain. We are doing everything on our part to make the agreement work. This is one of the main tasks for today. Let’s see if we can go further in the negotiation process.”

Al Jazeera’s Charles Stratford, reporting from Dnipro, 440km (270 miles) northwest of Mariupol, said vehicles gathered to get civilians out of the city, but it was unclear if any made it.

“There are three points in the city where buses are gathering for people to get on board to take them through the city of Zaporizhzhia [about 225km or 140 miles from Mariupol],” said Stratford.

“This corridor that is being set up will take people across the country, we understand, northwest through rural areas. The head of the regional administration encouraged private-car owners to fill their cars with as many people as they can to get people out of Mariupol to Zaporizhzhia.”

Ukraine says Russian forces have focused efforts on encircling capital Kyiv and Kharkiv, the second-biggest city, while aiming to establish a land bridge to Crimea.

Kyiv, in the path of a Russian armoured column that has been stalled outside the Ukrainian capital for days, was again under attack, with explosions audible from the city centre.

Ukrainian media outlet Suspilne cited authorities in Sumy, about 300km (190 miles) east of Kyiv, as saying there is a risk of fighting in the city’s streets, urging residents to stay in shelters.

Mariupol had become the scene of growing misery amid days of shelling that knocked out power and most phone service and raised the prospect of food and water shortages for hundreds of thousands of people in freezing weather. Pharmacies are out of medicine, Doctors Without Borders (Medecins Sans Frontieres, or MSF) said.

President Vladimir Putin’s invasion of Ukraine has drawn almost universal condemnation, and many countries have imposed heavy sanctions as the West balances punishment with avoiding a widening of the conflict.

Moscow denies targeting civilians in Ukraine and says its aim is to disarm its neighbour, counter what it views as NATO aggression, and capture leaders it calls neo-Nazis.

Zelenskyy was expected to press Washington for more help in a video call with the US Senate at 9:30am ET (14:30 GMT).

The United States is weighing cuts to imports of Russian oil and ways to minimise the effect on global supplies. Global oil prices surged more than  20 percent this week on concerns about supply shortages.