Cardinal Malcolm Ranjith today told the UNHRC in Geneva that although the first impression of the Easter Sunday attacks was that it was purely the work of a few Islamic extremists, subsequent investigations indicate that this massacre was part of a “grand political plot”. 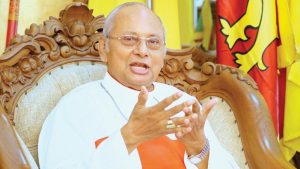 The Archbishop of Colombo made these observations while delivering a statement at the 49th Session of the United Nations Human Rights Council on Monday (March 7), on the Easter Sunday Bomb Attack in Sri Lanka.

He said that the Easter Sunday Suicide Bomb Attacks in Sri Lanka on 21st April 2019, claimed the lives of 269 including 82 children and 47 foreign nationals belonging to 14 nations and injured more than 500 others.

Cardinal Ranjith charged that despite their repeated requests and those of civil organizations pursuing the truth, the incumbent government of Sri Lanka has failed to mete out justice to the victims.

“Instead of uncovering the truth behind the attack and prosecuting those responsible, there are attempts to harass and intimidate those who clamour for justice,” he stressed.

“As a result, nearly three years after the horrendous crime, we are still in the dark as to what really happened on that Easter Sunday.”

He further said: “As this is a case of a serious violation of the fundamental rights of the aggrieved victims, we earnestly call upon the UNHRC and all its member countries to support the continuation of evidence gathering initiated by the Council last year and to devise a means to ensure an investigation to unravel the truth behind the Easter Sunday massacre.” – ada derana