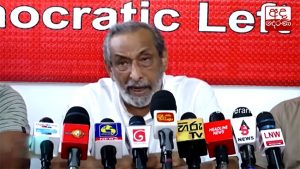 Leader of the Democratic Left Front (DLF) and Minister Vasudeva Nanayakkara says that he will write a letter to President Gotabaya Rajapaksa informing that he will not be participating in the weekly meeting of the Cabinet of Ministers.

He said that the President would be informed of this decision within tomorrow (07).

Meanwhile they also decided to write a letter to the President seeking justice on behalf of the two former ministers who were removed from their positions.

He was referring to the President’s recent decision to remove PHU leader Udaya Gammanpila and NFF leader Wimal Weerawansa from their respective ministerial portfolios.

Responding to questions from journalists, the minister said that they will continue to sit in the ruling party’s side in the parliament and that this includes all members of the 11 allied parties.

Nanayakkara said that they had received an invitation for talks with the Prime Minister, however they have still been unable to schedule a date and time for this meeting.

Asked whether they received a discussion with the President, he said that they did not even ask for one and that for now there is no need for it.

“They have no reason to invite us even for a discussion. When you look at the gap between them and us, there is no room for such a discussion.”  – ada derana