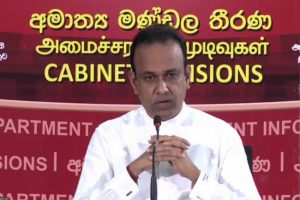 The island’s currency reserves have slumped 70% in the last two years to $2.31 billion and it has to repay about $4 billion in debt in the remainder of this year.

The drain of its dollars has left Sri Lanka struggling to pay for critical imports, including food, fuel and medicine.

He said the central bank governor, foreign and justice ministers would oversee the selection process.

Responding to a question, the minister said: “Yes, we have taken a policy decision to go to the International Monetary Fund, for which we need to have a technical committee. So, the government has appointed a committee, an economic council and also there is expert advice given to the committee.”

“And also in relation to the technical matters we have taken the decision to hire a company on a long-term basis for which we need to have a transparent process. That process would be headed by Prof. G.L. Peiris and also Minister of Justice Ali Sabry and also they would be assisted by the Governor of the Central Bank and also the Treasury Secretary.”

“So we have to hire someone in relation to the technical matters. Yes, we are going ahead with the decision we have initially taken to seek assistance from the IMF,” he stressed.