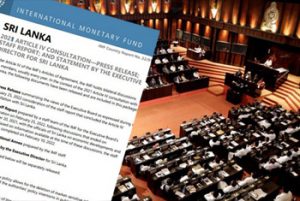 The Cabinet of Ministers has granted the approval to present the International Monetary Fund’s report on Sri Lanka to Parliament.

This was proposed by Finance Minister Basil Rajapaksa.

On Monday (March 28), Chief Government Whip, Minister Johnston Fernando stated that the government has decided to hold a debate on the IMF report when the parliament convenes again between April 05 and 08.

Meanwhile, former Prime Minister and Leader of the United National Party (UNP), Ranil Wickremesinghe, had called for an immediate debate in Parliament on the IMF report on Sri Lanka. “As the Government has agreed to engage the IMF for financial assistance, the Parliament must be briefed on their plan of action,” he had said.

Chief Opposition Whip Lakshman Kiriella had also written to Speaker Mahinda Yapa Abeywardena requesting him to immediately call for a party leaders’ meeting in order to decide on a date for the debate on the IMF report.

The International Monetary Fund (IMF) on Friday released its staff report on Article IV consultation on Sri Lanka which highlights that the island nation faces “solvency” issues because of risks stemming from unsustainable debt levels that jeopardize the country’s economy.

“Based on staff analysis, the fiscal consolidation necessary to bring debt down to safe levels would require excessive adjustment over the coming years, pointing to a clear solvency problem,” the IMF said.

The full report provides further analysis of Sri Lanka’s debt and finances. A summary of the report released earlier in the month said Sri Lanka faced unsustainable debt levels and needed a “credible and coherent” strategy to restore stability.

The IMF also noted that reforms should focus on strengthening VAT and income taxes through rate increases and base-broadening measures.