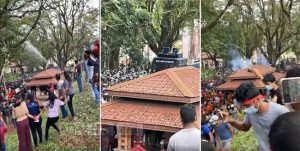 He said that a large number of university students had gathered near the university premises this morning to stage the protest while police had resorted to using tear gas and water cannons on them as they had attempted to march towards the Kandy town.

It is reported that most of the protesting students had dispersed following the actions taken by riot police while the increased police presence can still be observed in the vicinity. – ada derana