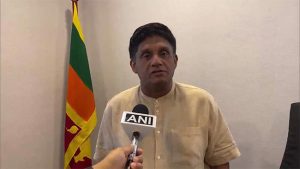 Sri Lanka’s main opposition party Samagi Jana Balwegaya (SJB) announced that it will move a no-confidence motion against President Gotabaya Rajapaksa’s government if it fails to provide immediate relief to the people of the island nation adversely impacted by the economic crisis.

“We have decided to bring a no confidence motion against Sri Lanka president Gotabaya Rajapaksa as he fails to address the country in connection with economic policies. We have called a meeting with all opposition leaders and will take a final decision on it soon,” Leader of Opposition, Sajith Premadasa told ANI.

Further, he said opposition MPs have also discussed that there should be an end to the Executive Presidency and power should be divided in Sri Lanka between the Executive, Legislature, and Judiciary.

Earlier, opposition leader Sajith Premadasa had said that Sri Lanka must abolish the all-powerful Executive Presidency and strengthen Parliament without paving the way to a similarly dictatorial premiership while ensuring adequate checks and balances.

“For nearly 20 years every leader promised to abolish the Executive Presidency but only strengthened it,” Premadasa said in a strongly-worded speech in parliament on Tuesday reminding the Parliamentarians about the necessity to introduce a new electoral system.

It is pertinent to mention that since the introduction of the presidential system in 1978, every election which ensued was fought on the promise to abolish the presidency. However, once elected all presidents chose to ignore the election promise.

Meanwhile, Sri Lankan citizens continue to protest against the current government across the country and have raised demands to sack the President and Prime Minister.

Sri Lanka is battling a severe economic crisis with food and fuel scarcity affecting a large number of the people in the island nation. The economy has been in a free-fall since the onset of the COVID-19 pandemic.

Sri Lanka is also facing a foreign exchange shortage, which has, incidentally, affected its capacity to import food and fuel, leading to the power cuts in the country. The shortage of essential goods forced Sri Lanka to seek assistance from friendly countries.