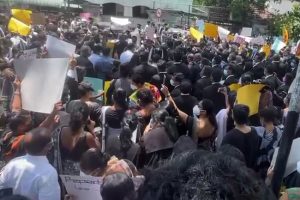 The Legal Officers’ Association of the Attorney General’s Department has condemned what it called the “unprofessional and unethical” conduct of a group of attorneys-at-law who recently staged a protest.

In a statement issued on Friday (April 08), the association said it is gravely concerned by the conduct of these lawyers.

It categorically denied the “baseless and unfounded allegations” made in respect of the Attorney General and the department.

“The Association reiterates its grave concern regarding the unprofessional and unethical conduct of the group of Attorneys-at-Law and of the statements published through electronic, print and social media, without any basis and without recourse to proper procedure, to clarify any matters that were of concern.”

The legal officers at the AG’s Department further expressed their solidarity with the Attorney General. “The Membership will meet any challenge, as members of the Official Bar, who have always acted in accordance with the law and the Constitution without any fear of favour in discharging their official duties.  – ada derana