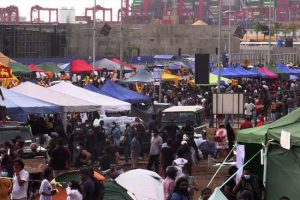 The mass protest against the government at the Galle Face Green is continuing for the sixth consecutive day, as participants are also marking the dawn of the Sinhala and Tamil New Year at the venue.

The protest had commenced on the 9th of April (Saturday) with the participation of a large number of people including youths from all across the island and the protesters have been setting up tents in front of the Presidential Secretariat and engaging in demonstrations day and night.

Braving the heavy rains, they have since been protesting in front of the Presidential Secretariat, urging the President to step down amidst the economic crisis and political turmoil in the country.

The apolitical protesters have also set up a small village at the Galle Face Green premises, providing free food, beverages, makeshift tents, emergency medical facilities for those who arrive there in support of the demonstration.

Ada Derana correspondents reported that despite the heavy rains, large numbers of people had also gathered for the protest last night.

The protesters have also planned to celebrate the dawn of the Sinhala and Tamil New Year at the same location.

Prime Minister Mahinda Rajapaksa on Wednesday said he is ready to talk with those who have been protesting at the Galle Face seafront near the presidential secretariat for the past couple of days.

The protesters holding placards have been calling for the President and the government to step down.

“I am willing and prepared to meet the citizens currently engaged in protest at Galle Face to hear their thoughts and complaints. Understanding that this is a tough time for all of us, I invite them to meet and discuss possible and plausible courses of action for the sake of Sri Lanka,” the PM tweeted.

A statement from the Prime Minister’s Office also said the same.

“Prime Minister Mahinda Rajapaksa declares that he is ready to negotiate with the protestors who picket at the Gall Face Greens on socio-economic and political issues in the country,” the PM’s Office said.

“Accordingly, important thoughts held by the protestors will be discussed in detail for the sake of overcoming the challenge faced by the country at the moment,” the statement said.

Prime Minister Mahinda Rajapaksa further mentions that he invites the representatives of the groups who picket if they are ready to negotiate.  – ada derana